The Best Small Cities to Start a Small Business 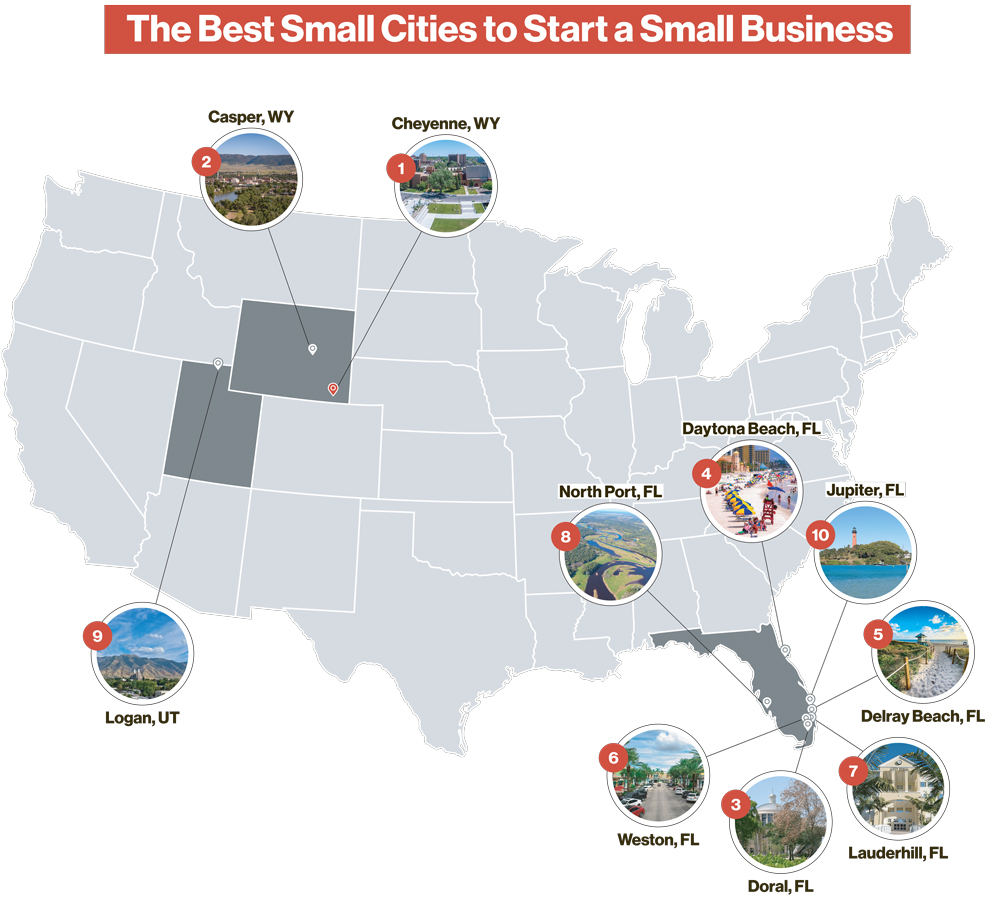 America has become the veritable poster child of the startup era. It’s hard to look at the surge of self-made billionaires across all industries within the US and their humble startup beginnings and not feel a certain amount of awe. Despite the circumstances of the past year, the small business landscape of 2021 looks promising.

When it comes to places rich with business growth and opportunity, small cities don’t generally come first to mind. But avoiding the chaos and competition of large cities and planting your roots in a quieter, yet equally industrious pocket of the country puts your business in a uniquely advantageous position. For the fourth consecutive year, Go.Verizon conducted intensive research to again conclude that smaller cities allow plenty of room for business growth.

So how did these cities win the top spots? It’s all about the numbers. Go.Verizon gathered data from nearly 300 cities across the country, focusing on certain factors that would categorize them as “small” (sorry, no Silicon Valley on this list) without dipping below the mark to “town” status (no one-horse situations, either). These elements also indicated the financial and tax climates of each city and an overview of its education.

Population: According to the US census, the population of a city must fall between 50,000 to 75,000 people to be considered a “small city.” Most of the spots in the top ten hit the high end of the scale, but still manage to balance out the urban stride with a more hometown vibe.

Percent of residents with at least a Bachelor’s degree (15%): In order for your city to qualify for this list, you have to show us your smarts. We completed an analysis of the percentage of the population over 25 years old who have received a bachelor’s degree or higher from an accredited university or college. This information came from the 2019 American Community Survey 5-Year Estimate. (A higher percentage positively impacted the final score.)

Travel time to work/commute (15%): According to the 2019 American Community Survey 5-Year Estimate, this includes the average total travel time it takes working individuals 16 years and older (who do not work at home) to reach work from their residences every day. This takes into account the time spent carpooling, waiting for public transportation, and navigating traffic, and “other activities related to getting to work.” (A higher travel time negatively impacted the final score.)

Broadband Access Score (10%): High-speed internet is crucial to modern business operations. We analyzed information taken from the Federal Communications Commission’s 2017 Residential Fixed Internet Access Service Connections per 1,000 Households by Census Tract (most recently updated September 2019). In order to be included on the list, businesses must have access to internet service with at least 10 Mbps download time and 1 Mbps upload time.

Loans per business (20%): New businesses can rarely get off the ground without a loan. How easy is it to get a business loan in your city? To find this out, our team gathered data from the SBA Paycheck Protection Program and Small Business Profile’s 2021 report. From there, we determined the percentage of loans per business within each city.

Tax score (25%): Typically, lower taxes provide a better environment in which to establish a new business. So to determine each city’s tax score, we pulled information from the 2021 State Business Tax Climate (the 2021 score). The higher a city’s tax score, the better its ranking.

Once we gathered all of the data listed above, we adjusted our measurements and then ranked the scores, highest to lowest, to provide the best small cities to start a small business in. Did your hometown make the list? Find out below.

*NOTE: We used the most recent data available from each category to determine the results of the list.

Cheyenne is the reigning champion of small business cities for the second year in a row. This isn’t necessarily surprising, as Wyoming’s tax score is the best in the nation. Cheyenne ranked #1 according to the Tax Foundation as having the best Business Tax Climate Index. As it’s a more sparsely populated city in general, Cheyenne also claimed the shortest travel time to work at just 14 minutes. That’s 44% shorter than the average travel time for the other 789 cities we analyzed. The city also boasts above-average internet access, which in today’s world will make or break a business’s success. And hey—the beautiful, Wild West backdrop might be another appealing reason to set up shop there.

It’s a good time for business owners in Wyoming, it seems. Like Cheyenne, Casper comes in at #2 for the second year in a row in the small cities/small businesses race, behind only Cheyenne by a slight margin. Casper reports a mean income at 12% below average, meaning labor costs businesses less in this area. The city also has the backing of the US Small Business Administration, which recently awarded Wyoming a staggering $19 million to expand small business exporting.

In an impressive show of grit and innovation, Doral made quite the jump from its ranking of #14 on last year’s list. It kickstarts Florida’s domination of our 2021 list, which makes sense since the Sunshine State’s tax score is one of the best in the country (ranking at #4). In addition to its tax-friendly environment, Doral is the second-most educated city on the list after Weston (over 51% of its citizens hold at least a bachelor’s degree). The city also has generous broadband access and a booming work economy, thanks to its proximity to Miami-Dade.

Contrary to popular belief, Daytona Beach is much more than a hot spot for spring breakers. The city is actually quite industrious. Though it’s not high ranking as far as income per capita goes, the city holds its own with easy access to business loans, broadband, and quick work commute times. Admittedly, the influx of partiers once a year probably helps the local economy a bit, but Daytona Beach stands on its own merit as a city with two sides: one that knows how to party, and one that knows how to get down to business.

There’s more of a draw to this city than its spread of sunny beaches along the southeastern coast of the state. Not quite as high on the education scale as Weston but higher than North Port and Lauderhill, Delray Beach is a happy medium with the second shortest average commute time among the seven other Florida cities on this list. It enjoys a thriving industry of restaurants, nightclubs, retail shops, and art galleries, which is important to keep in mind when considering where to put your business’s roots down.

Ranking #26 among the top 100 safest cities in the country is reassuring for a fledgling business; it wouldn’t do to get robbed your first week in town (or at any other time). Weston is also the most educated city in the top 10, with nearly 63% of the population holding at least a bachelor’s degree. The only downside to setting up shop here is the commute to work, which runs at about half an hour, but hey—you’re not far from the beach and the Everglades are basically in the city’s backyard, so let’s call it even.

If you like the vibe of Miami but want to tone its bustling pace down a bit, Lauderhill is the place for your business. Though technically the least-educated city on the list—just 19% of residents hold a bachelor’s degree or higher—Lauderhill makes up for it with a quickly growing and diverse job market. And its location between three major international airports, several major roads, and three large ports ensures that it’s a main hub for trade, tourism, and prosperity. A stone’s throw from Miami proper, there’s a lot that Lauderhill has to offer; and we’re definitely taking notice.

With Florida’s magical tax scores on its side and a decent income per capita at over $35,000, North Port isn’t doing too bad for itself at all. The gem of Sarasota County has its share of beautiful beaches and exciting culture that’s prime scenery for the ambitious entrepreneur. Though it ranks lower on this list than Lauderhill, North Port citizens hold more degrees than the #7 seat and more income per capita than both Lauderhill and Daytona Beach. One could argue that the city is a bit more quiet than others in Florida that made the list, but boring it most certainly is not. If anything, the excitement there is only growing.

In its fourth consecutive year among the top 50 small cities for small businesses, and second consecutive year in ninth place, Logan has proved it hasn’t lost any of its competitive edge. A growing college town nestled in Utah’s northern Cache Valley, Logan ranks #8 on the Business Tax Climate Index, with a tax score 14% higher than the average city on the list. The small city also has the second shortest commute time to work at a total of 15 minutes. It seems that Logan is a city where both the booksmart and the business savvy love to settle down.

Sharing the same side of the state as Doral, Lauderhill, and Weston, Jupiter has a reputation as one of the best beach towns in the state. Interestingly, Jupiter comes in first place as far as income per capita, with the average citizen making over $50,000 per year. This tropical town isn’t just a destination for vacationers or those looking for property near the beach—its relatively easy access to business loans, tax score, and high education rate combine to make the perfect environment to start a small business. Though the pretty beaches aren’t exactly necessary to get a small business going, they certainly are a fine perk of setting up shop in Jupiter.

The top 50 cities to start a small business: